Fortunately for Software Engineers, the introduction of IPv6 is going to be less of an inconvenience than for Network Engineers. If you still need to understand the basics of IPv6, before this read my other blog post: Beginner's Guide to IPv6

That being said, it is becoming increasingly important, especially on mobile devices, to have your apps support IPv6. For example, on May 4th 2016, Apple declared that as of June 1st, all apps submitted to the AppStore must support IPv6 only networking.

The reason for Apple (and other tech giants) enforcing this is now clearer than ever; some mobile ISPs have simply run out of IPv4 space and are giving out only IPv6 addresses or Carrier Grade NATted IPv4.

An IPv6 ready app doesn't mean it has to work in IPv6 only networks. There are going to be various transition mechanisms to help the transition to IPv6 go smoothly. Your app needs to handle:

IPv6 is going to start to appear in EMail Headers, SIP, DNS, etc... Your application needs to be able to understand these addresses in URLs, header fields and data. And you need to make sure that applications doesn’t crash when meeting these 128 bits or longer text strings for the first time.

For web servers, such as IIS, nginx, Apache, etc... you will start seeing IPv6 addresses pop up in your log files, referrers, remote IPs etc... It is very common to find regular expressions to match IPv4 strings; these will no longer work with IPv6. In fact, it is no longer recommended to parse IPv6 addresses using Regex given that IPv6 address can have very different formats. Ideally, you should use a library to do this job for you, for example the IPAddress in .NET and and InetAddress in Java.

Is your database schema ready to accept IP addresses of 128 bits in length instead of 32? Are you deploying your applications on Operating Systems that support Dual Stacking?

Make sure that the libraries that you are using are also IPv6 Ready. For example, if you are using a library to parse User Input to IP address, the library may not have been yet updated. As Microsoft notes to their developers, IPv6 addresses are unlike IPv4 addresses in that their length is unpredictable. This has ramifications for nearly every type of user interface. Where a fixed space was previously allocated in a user interface for IPv4 addresses, that fixed space would necessarily not be sufficient for IPv6.

As IPv6 addresses are textually expressed with colons (:) and the host and port are separated by a colon, placement of IPv6 addresses in URLs requires that they be escaped by square brackets ([ and ]). The following is the correct way to formulate an HTTP URL with an IPv6 address: https://[2001:500:4:13::125]:443/

If an application needs to connect to some service by name, it will use a DNS name resolver to translate that name into a list of destination addresses. It is worth mentioning that the version of the IP protocol used to carry the DNS queries is independent from the protocol version of the addresses included in the DNS data records.
Which means that you can connect through IPv4 to a DNS server in order to query for information related to IPv6 and the other way around. Remember though: being able to translate a name server into an IPv6 address doesn't mean that the application running on that server supports IPv6.

It is quite common for server-based applications to tailor services based on the location of the client, and one such method used is to locate the client geographically using the client’s IP address (IP geolocation). In this case, changing of the address type from IPv4 to IPv6 may have some implications.

IP Geolocation works by taking the IP address of the system being geographically located and looking it up in a database. How the database is created and how accurate it is depends on the provider of the database. Depending on which IP geolocation database is in use, IPv6 may not be supported.

For some IP geolocation systems, the API into the database has changed to support IPv6, and for the feed-based systems, which enable customers to locally store the data in a relational database such as MSSQL, there are likely schema changes needing to be made.

Some client applications send data or create connections specifically to other processes on the same node using IP sockets. Some server applications have special processing rules, such as authorization policies, that change if the software recognizes the connection is from another process on the same node. This communication happens using an IP address known as the loopback address, usually referred to as localhost.

When you think you are finished, test, test and test.

If you have a Windows application that uses socket-level programming you can use Microsoft's checkv4.exe Utility. The Checkv4.exe utility is designed to provide you with a code porting partner; a utility that steps through your code base with you, identifies potential problems or highlights code that could benefit from IPv6-capable functions or structures, and makes recommendations.

If you have a public website you can look for public tools such as internet.nl that can automatically test your site for IPv6 connectivity: 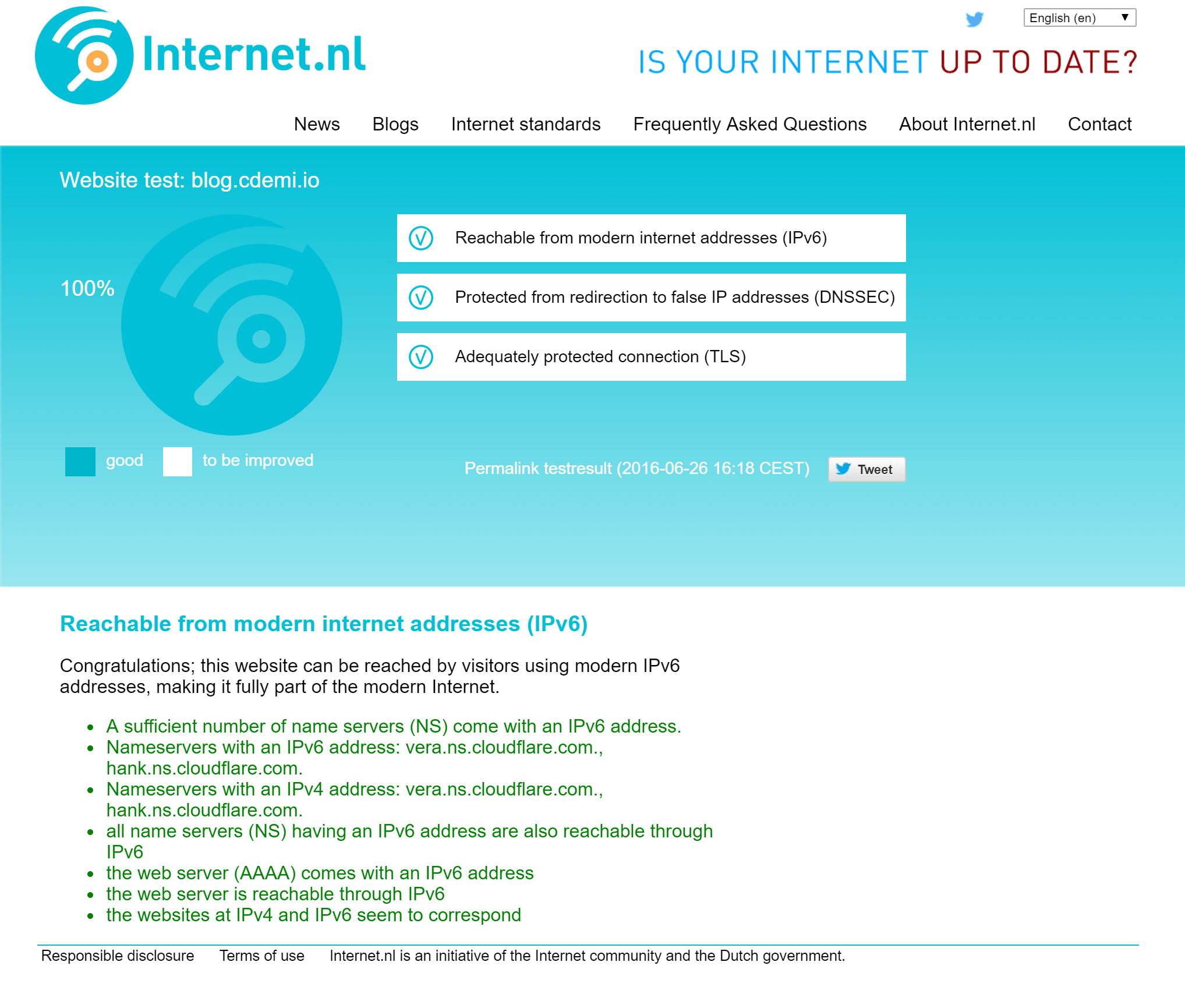 Origins of the Domain Name System

DNS is a critical infrastructure component of the Internet. How did it originate? How does it work? Who controls it? Is it secure?

There are no longer any IPv4 addresses available for allocation from IANA. This means that adoption of IPv6 is now of paramount importance.